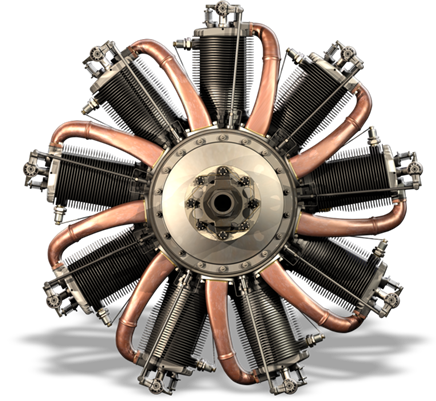 must both be manipulated by the pilot to provide the correct mixture at a given throttle setting. With such cantankerous controls it is easier to throttle the engine in combat by “blipping” it on and off with the ignition. To add to this complexity the French used unconventional controls; to open the fuel or air valve you pull the levers toward you, difficult when you consider, most aircraft require the pilot to push the throttle control in for full throttle.Starting the Le Rhone is a relatively simple procedure provided you have several friends. First the aircraft must be moved to the flight line with some sort of dolly because it has only a tail-skid, then chocked in this position, it has no brakes, once readied it is a good idea to have two people hold back on the struts, starting at more than an idle is inevitable. Another person is needed to prime the engine through the exhaust ports or alternately swing the propeller in an attempt to “windmill” the engine to suck in the intake charge. This same person can take control of the fire extinguisher and oversee the entire operation while the starter grasps the propeller to swing it in the “Armstrong” fashion. Once started, the engine is allowed to warm up for a few minutes and then adjusted for maximum rpm. Sound is a great indication of the condition of the engine; a raspy crackling sound usually means a lean mixture, a muffled sluggish tone would indicate an overly rich mixture. When satisfied with the correct settings the engine is idled by “blipping” the ignition on and off with a switch on the control stick.

One of the most interesting parts of this airplane is the 80 hp LeRhone rotary engine. State of the art in it’s day and very unusual today; the entire engine spins with the propeller. Company brochures even claimed that the spinning effect could deflect bullets! It is true that they were able to continue running even with a damaged cylinder or two. Gyroscopic forces generated by this rotating 300 lb mass produce some very distinct handling characteristics. Full throttle is reached at 1200 rpm with a huge 108 inch prop. This wonderful powerplant was small, compact, and reliable for it’s day. Smoother running than many horizontally opposed engines and relatively quiet (it makes a distinctive “whoosh” sound). Controls for the engine consist of an air valve and a fuel valve, which 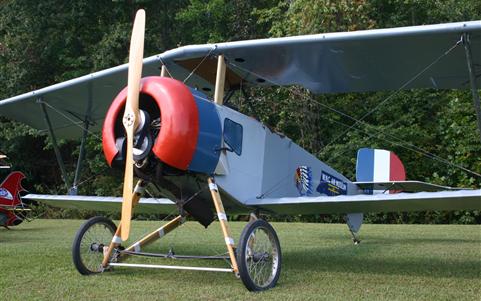 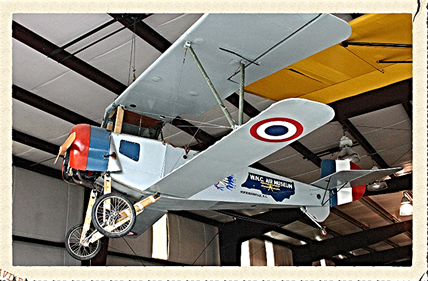 The Nieuport 11 "Bebe" (or "Baby" - known officially as the "Nieuport 11 C1") was one of the first true Allied fighters of World War 1. Developed from a prewar design intended for competition, the militarized form brought with it the expected excellent performance inherent in a racing platform. Designed in a mere four months, the Nieuport 11  retaining the "Bebe" nickname of its predecessor  proved instrumental in ending the dominance of German Fokker based aircraft during 1916 in what came to be known as the "Fokker Scourge". The French Nieuport series, as a whole, would end up becoming one of the best fighter lines in all of World War 1, eventually becoming collectively recognized by the name of "Nieuport Fighting Scouts"