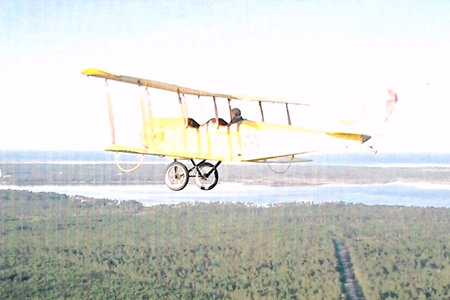 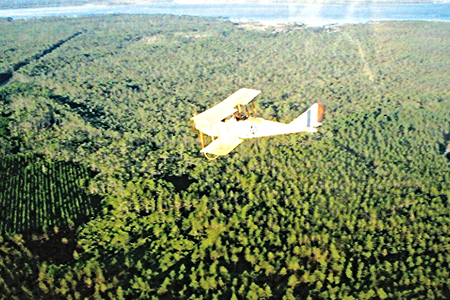 The aircraft on display is a 2/3 scale flying replica of the JN-4D. Plans were designed by Dennis Wiley of Colorado and the aircraft was built and flown by Donald R. Waddell. This replica has a wing span of  28 feet and a length of 17 feet.

The FAA Airworthiness Certificate was issued July 2003. The Jenny was first flown on October 15,2003. This aircraft has in fact flown for 110 hours representing nearly 200 flights.

The Jenny was donated to the museum by Col. Donald R. Waddell  USAF Retired, (Picture at Right) also known as "Rube" Waddell 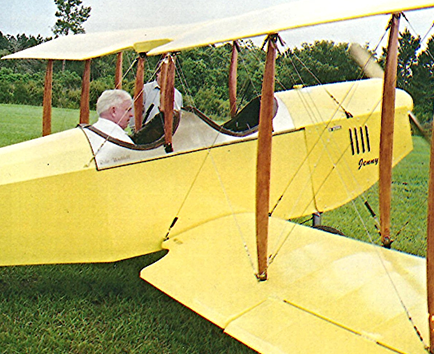 it ideal for initial pilot training with a 90 horsepower  Curtiss OX-5 V8 engine giving a top speed of 75 miles per hour  and a service ceiling of 6,500 feet. Although ostensibly a training aircraft, the Jenny was extensively modified while in service to undertake additional roles. Due to its robust but easily adapted structure able to be modified with ski undercarriage, the Canadian Jenny was flown year-round, even in inclement weather. The removable turtle-deck behind the cockpits allowed for conversion to stretcher or additional supplies and equipment storage, with the modified JN-4s becoming the first aerial ambulances, carrying out this role both during wartime and in later years. Most of the 6,813 Jennys built were unarmed, although some had machine guns and bomb racks for advanced training. With deployment limited to North American bases, none saw combat service in World War I.
Surplus US Army aircraft were sold, some still in their unopened packing crates, for as little as $50, essentially "flooding" the market.  With private and commercial flying in North America unhampered by regulations concerning their use, pilots found the Jenny's slow speed and stability made it ideal for stunt flying and aerobatic displays in the barnstorming era between the world wars.

The Curtiss JN-4 is possibly North America's most famous World War I aircraft. It was widely used during World War I to train beginning pilots, with an estimated 95% of all trainees having flown a JN-4.
The U.S. version was called "Jenny", a derivation from its official designation. It was a twin-seat (student in front of instructor) dual control biplane. Its tractor prop and maneuverability made