The Taylor Cub was originally designed by C. Gilbert Taylor as a small, light and simple utility aircraft, evolved from the Arrowing Chummy. It is the forefather of the popular Piper J-3 Cub, over 20,000 of which were built.
In 1930, C. G. Taylor and the Taylor Aircraft Company embarked on the production of a two-seat tandem low-powered aircraft,designated the Taylor Cub. The Cub featured a design with wings mounted high on the fuselage, an open cockpit, fabric-covered tubular steel fuselage and wooden wings which used the USA-35B

airfoil. It was originally powered by a 20 horsepower Brownback "Tiger Kitten" engine. Since the young offspring of the tiger is called a cub, Taylor's accountant, Gilbert  Hadrel, was inspired to name the little airplane "The Cub".
The "Tiger Kitten" engine roared but was not strong enough to power the Cub. On September 12, 1930, a test flight of the Taylor Cub ended abruptly when the aircraft ran out of runway; the underpowered engine was unable to lift the monoplane higher than five feet  above the ground. In October, a Salmson AD-9 radial engine produced in
France was fitted to the Cub giving good performance, but it was expensive to maintain.
Finally in February 1931, Taylor introduced an improved Cub airframe, powered by the newly developed Continental Motors 37 horsepower  A-40 engine.
The new Taylor E-2 Cub was awarded Category 2 or "Memo" certificate 2-358 on June 15, 1931 and licensed by the U.S. Department of Commerce for manufacture (it was later awarded full Approved Type Certificate A-455 on November 7). 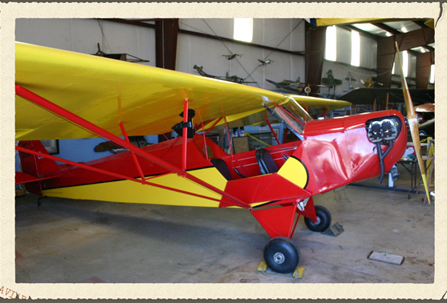