The Piper J-5Cub Cruiser was a larger, more powerful version of the basic Piper J-3 Cub. It was designed just two years after the J-3 Cub, and differed by having a wider fuselage with the pilot sitting in the front seat and two passengers sitting in the rear seat. Equipped with a a 75-hp Continental engine the plane's cruising speed was 75 mph. Though officially a three seater, it would be more accurately described as a "two-and-a-half-seater", as two adults would find themselves quite cramped in wider rear seat. The Cruiser sold for $1,995 when it was first designed.

Production of the three models of the J- (-A, -B, -C), fall into two categories that differ considerably. The obvious difference can be seen in the landing gear. Early versions, of which 783 were built between 1940 and early 1942, have external bungee's. Those built from 1944 to 1946 included design changes developed for the United States Navy HE-1 flying ambulance, and these models have internal bungees. Currently over 500 J-5s remain on the FAA registry.

Throughout World War II, Piper modified the basic structure of the J-5A. The J-5B had a 75-hp Lycoming GO-145-C2 engine. The later J-5C also built as the HE-1 (later AE-1) ambulance for the U.S. Navy with rear hinged fuselage decking, used the fully cowled 100-hp Lycoming O-235-C engine with an electrical system, and redesigned landing gear.

After the war, Piper dropped the J- designation system in exchange for the PA- system, and the J-5C became the PA-12 Super Cruiser. The Super Cruiser was more popular than the basic J-5A, with 3,759 being built.

Piper also produced a four-seat variant of the Super Cruiser with a 115-hp engine. It was designated the PA-14 Family Cruiser. It was the least successful of the three Cruiser designs in terms of aircraft sold, with 238 being built in 1948/49, and only about one hundred remain in existence. 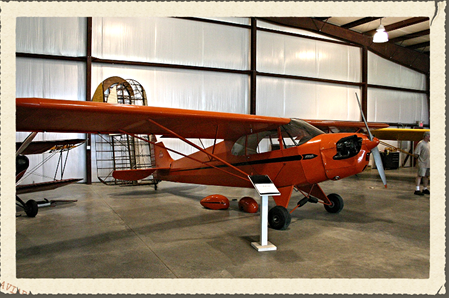