This exceptional aircraft  was generously  donated to the museum by:  Robert J. Wickenden  of Tonopah, Nevada 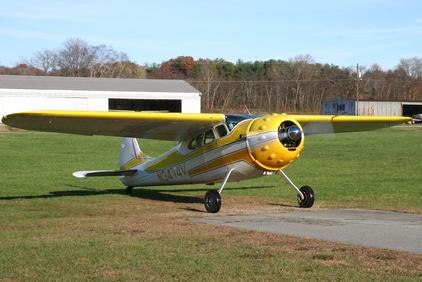 The 190 and 195 evolved out of the Cessna Airmaster, an efficient 1930s design by Cessna's Dwane Wallace that extracted more than 1 mile per hour out of each horsepower the engine could produce.
The production 190-series airplanes are all metal, unlike the Airmaster's wood, metal, and fabric construction.
Upon introduction, the 190-series was touted as "personal business liners" or the "family car of the air." The design was the first production airplane to use the spring steel main landing gear designed by Steve Wittman, the late air-racing legend.
Nearly 1,200 of the 190/195s and military LC-126s were built. Only 233 were Cessna 190s, which were discontinued in 1953. Production of the 195 ended in 1954.Differentiating between the 190 and 195 is hard for the casual passerby. If the designation is not printed on the side of the airplane, you can poke your head into the cowling to confirm the identity.
The 190 has a 240-horsepower Continental W-670, a derivative of the 220-hp engine that powers Stearmans. The 195 is powered by Jacobs engines of 245, 275, or 300 horsepower. Engine-conversion STCs boosted horsepower to 330 in normally aspirated form or to 350 in a turbocharged iteration. Of which you are seeing here in our 190 which is now on display at the museum.
Yet another conversion long since buried was for a 450-hp Pratt & Whitney Wasp Jr...

Help us in our mission to acquire and preserve aircraft such as this: Which are vital links to our    aviation history. You can do so safely buy clicking on this Pay Pal link..