It is powered by a 1 cylinder water cooled, governor controlled, gasoline burning engine developing about 2.5 horse power. The engine was manufactured by International Harvester during the 1930's. It was designed to operate stationary equipment mostly on farms.This particular engine is a model "LA" that has an added gear box to operate equipment such as irrigation pumps.

Perhaps the inspiration of the bat shines through the most, as the two wings of the device feature pointed ends commonly associated with the winged creature. Leonardo da Vinci’s flying machine had a wingspan that exceeded 33 feet, and the frame was to be made of pine covered in raw silk to create a light but sturdy membrane.

The pilot would lie face down in the center of the invention on a board. To power the wings, the pilot would pedal a crank connected to a rod-and-pulley system. The machine also had a hand crank for increased energy output, and a head piece for steering. As the busy pilot spins cranks with his hands and feet, the wings of the machine flap. The inspiration of nature in the invention is apparent in the way the wings were designed to twist as they flapped.

Unfortunately, as da Vinci himself might have realized, while the flying machine may have flown once it was in the air, a person could never have created enough power to get the device off the ground. 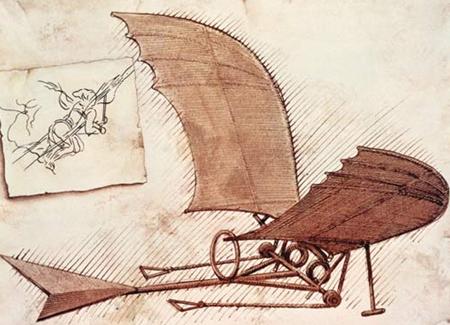 Of Leonardo da Vinci’s many areas of study, perhaps this Renaissance man’s favorite was the area of aviation. Da Vinci seemed truly excited by the possibility of people soaring through the skies like birds.

One of Da Vinci’s most famous inventions, the flying machine (also known as the "ornithopter") ideally displays his powers of observation and imagination, as well as his enthusiasm for the potential of flight. The design for this invention is clearly inspired by the flight of winged animals, which da Vinci hoped to replicate. In fact, in his notes, he mentions bats, kites and birds as sources of inspiration. 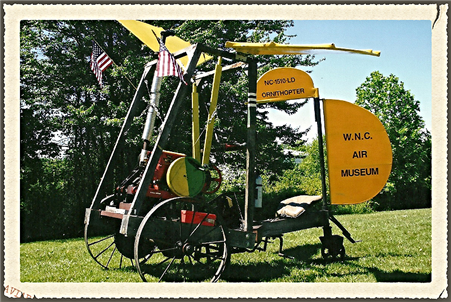 Although our Ornithopter has failed to obtain flight it has given pleasure to thousands of children and put smiles on the faces of many a adoring parent and adults alike.
Our museum is always looking for more members, particularly members who like to volunteer to help out with project such as the Ornithopter.

There is no charge for rides in the Ornithopter it is funded by our membership and  generous donations     from people like you! Wish to help? You can do so safely by clicking the Pal Pay this link.