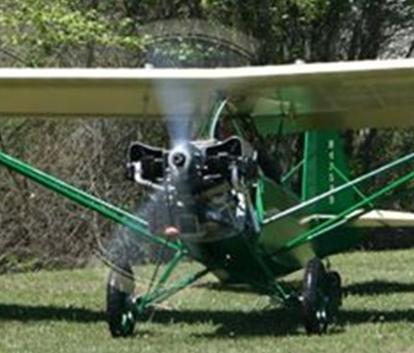 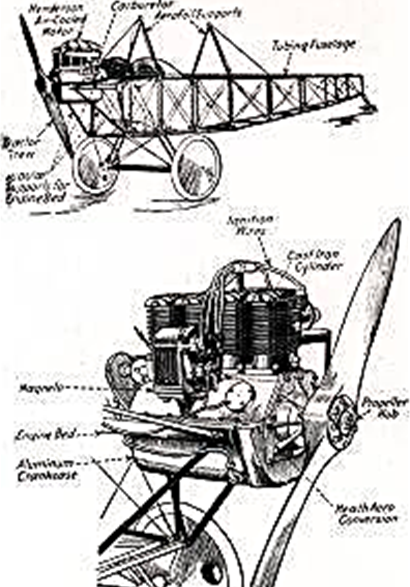 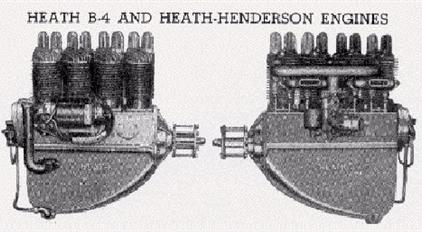 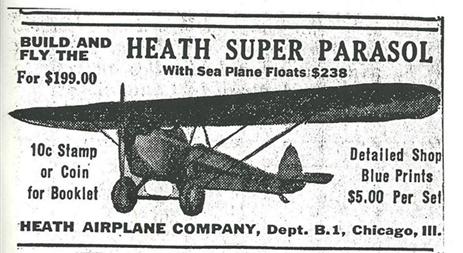 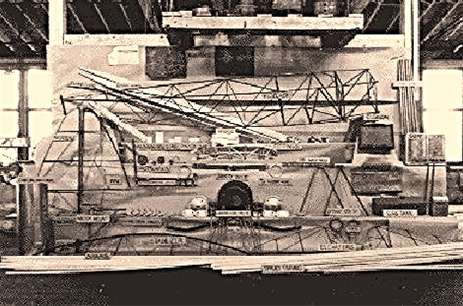 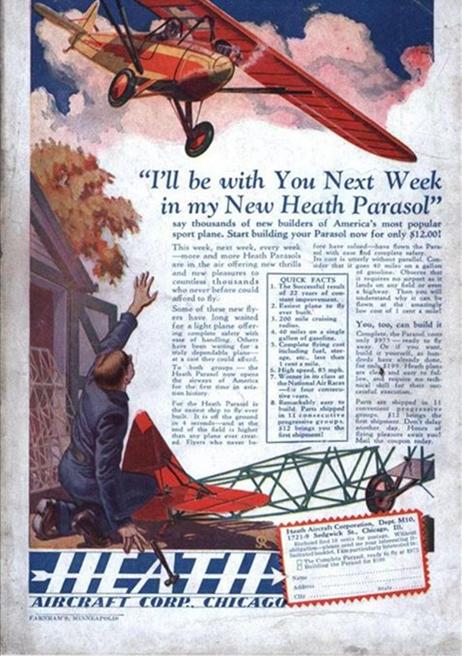 This plane was much like the other monoplanes of that period, and did not possess the individuality that later characterized the Heath planes. But, it flew - and from that day on, Edward Heath dedicated his life to a career in aviation.

In 1926 Heath and Claire Linstead, a designer whom he employed, designed and constructed the first Heath Parasol. This was a single-seat, high-wing, monoplane with a span of 26 feet. It was built around a 27 hp Henderson motorcycle engine. The designers improvised somewhat - the wing was contrived of two lower wings of a Thomas-Morse Scout biplane, braced with steel tubing and cables.

The following year they constructed another version of the ParasoL This plane was cleaner. It had a 24 foot span and was powered with a Cherub. He called it the Spokane Super Parasol and proceeded to annex the light and sport plane events with it at the Nation-al Air Races in Spokane. His take: $1,000.

This event marked a turning point; Heath had found his light plane market and he used every kind of bait possible to push the sale of his Parasols. You could buy a Parasol, fly-away, Chicago, for $975. If you couldn't afford that, you could buy it, less the engine, for $690. Still too much? Okay! You could buy it in kit form. The kit came in eleven groups. The first group cost $12.47. The total cost of the eleven groups, less the engine, was $199! Still too much? Well, you could buy the blueprints for $5 and get your own materials. These were the first Heathkits and, evidently they didn't have a 1 0% down, twelve month to pay time payment plan such as we have now.

The Heath Parasol, or to be exact, Super Parasol, created an entirely new group of airplane owners. Guys who had never taken an active interest in flying because of the high cost flew into aviation sitting in a Parasol cockpit. Pilots who heretofore could not afford to own and maintain an airplane became Parasol owners. Thousands of these little planes were built in barns, garages, and cellars. Some were assembled in rooming houses, others in deserted theaters, and one in a church.

The only tools necessary to assemble one of the kits were a pair of small pliers, screwdriver, hacksaw (with plenty of blades), hammer, small hand drill, chisel, center punch, file and drill.

The little Heath craft was a well designed, compact monoplane with exceptionally clean lines. It was sturdy, stable and flew easily. This was a dream come true for Ed Heath. He had successfully marketed a low cost airplane. His firm prospered and won an international reputation.

The Parasol had proved itself. Now he decided to build a low-wing and a mid-wing. It was the low wing aircraft that he was testing in February of 1931 when he crashed. The little man whose determination and genius had created and guided the Heath Airplane Company was gone. It is nearly 90 years since Ed Heath built his first plane.

And he is remembered fondly by today's homebuilders, for it was he who developed a practical, simple, economical airplane the average individual could build and fly. It was also Heath who introduced the kit concept for packaging of materials needed to build an aircraft. Today's homebuilder has embraced the kit concept with enthusiasm as it saves time in hunting down materials, providing a single-source for the thousands of items that are involved in building an aircraft.

We homebuilders owe a lot to Ed Heath!

Edward Bavard Heath for whom the 1920's era Heath Company was named, was born in New York state in 1888. His family owned a machine shop where he acquired his engineering education by the trial and error method, and this is where he built his first plane. 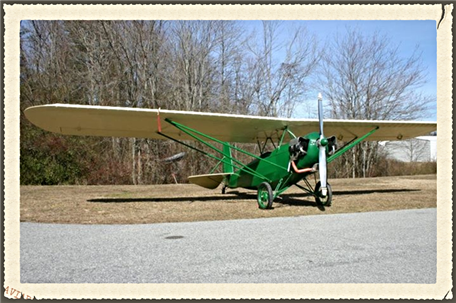