Now that it was confirmed that the push rods were in fact to long, we decided to do some experimenting. A pair of extra rods went to a machine shop and had the minimum .035 thousands milled off them. When they came back a were placed in the engine we now had full compression. They were tried in each cylinder to assure same results. It was then decided to go ahead and send out the full set of push rods to the shop to have the same done to them.

On March 2nd 2011, ten years since the project began; the engine of the Heath Parasol Project  came to life with a roar, followed by the cheers by all present. Since that day the plane has been gone over from nose to tail assuring that it is in fact now in airworthy condition. The plane continues to be run regulary and is taxied around the field. Testing procedures continue to receive FAA final airworthy approval and certificate.

We would later discover in some of  the paper work a note concerning mill work being done to the cylinder mounting area of the engine's case. This work was said to be for removal of  some damaged material. Nothing was stated about where the work was done or how much material was removed. But such work would explain the mystery.

If you would like to view more of the pictures of the whole project from the beginning and follow the progress of this project to the end, just click box to view the full Heath Parasol Restoration Photo Log

During the reassembly process the engine would receive a heavy amount of lubrication. A pressure tank was attached to one of the engines oil journals to send oil to all the components . The crankshaft was turned 100 times along with each piston and cylinder assembly to seat everything properly; plus assure all components turned freely when fully assembled.

After complete assembly of the engine it was now discovered that there was in fact no valve clearance. With the hydraulic lifters deflated there should be a gap of between .035 thousands of a inch minimum to .110 thousands max. In this condition the engine could never produce enough compression to fire and start.

One thing that was discovered was that the crankshaft turned freely and there was no damage to any of  the parts. The engine over the years had  just  had the small amount  of assembly lube dry up: Which was why the engine could not be turned. Also fortunately no one had tried to force the issue over the years. By this time some of the paper work had started to turn up such as receipts, yellow service tags from a shop for the cylinders, and the building logs and pictures. All confirming what we had discovered  already. At this point it was decided to go ahead and reassemble the engine.

The cylinders and related assemblies were removed from the case. All then cleaned, inspected and heavily lubricated for the reassembly process. Now that we had the ability to see the part number on the camshaft; we then checked them with the part numbers on the engine case to see if the proper parts had been installed during the rebuild. These turned out to be correct and  to recommended specifications.The same also held true for the rest of the valve train assembly.

It had been for the longest contented, but never confirmed that the push rods were to long. These were measured and found to be also true to the factory specified length. So the head scratching  would continue as we tried to find out the reason for the engine not being able to start.

You can help us keep the museum and it's collection of aviation history alive with your tax deductible donations. You can do so safely by clicking this PayPal link. 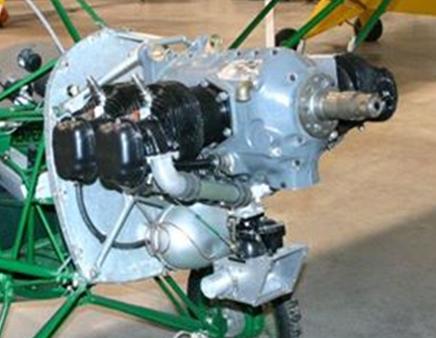 The number one and most evident issue was that the engine could not even be turned over for some reason yet to be discovered. After brainstorming with a couple of  A&P mechanics on the field and some of the original build crew that could be contacted: The decision was made to start with an engine tear down clean and inspection while waiting for any paper work that might be recovered.

It was decided at the June 2010 Museum's Board of Directors meeting that this project would be again revisited, with the intention of making the plane air worthy as was the original intent.

First thing that was discovered was that the projects building logs and other related paper work had been misplaced and not readily available or even on site. So word went out to members of the original project crew in the hopes of rounding up what we could of the material.

In the mean time the decision was made that while the searching for the paper work was on going that we would start inspections and addressing the known issues.

The museum eventually purchased the project from our two members in 2001. It was planned that the aircraft would be completed and flying in time for the Wright Brothers Centennial Celebrations in 2003. Unfortunately a number of events would cause this project to be sidelined as a static display, and uncompleted for a number of years.

The museum's Heath Parasol project was originally purchased by two of our members over 20 plus years ago from an estate. The original builder was meticulous in his construction. His attention to detail is especially visible in the wood work on the wings of this aircraft. Working only from plans several years went into it's partial construction. 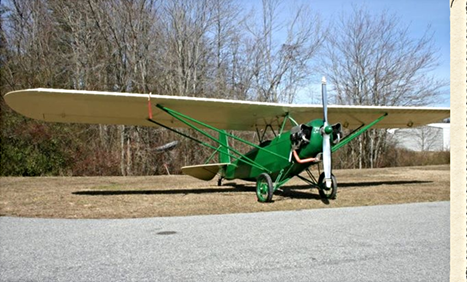 We then moved onto the major parts. The game plan was to cover the wings then the fuselage. After both wings had been covered and  stitching and taping completed. These also were then primed and painted.
The fuselage under went the same process, before it was finally time for reassembly. At the  time all this work continued the Continental A-40-4  engine was disassembled ,cleaned and inspected.
The restoration now completed "The Cub" has been running and taxied around the field again. Come see it proudly on display on the museum floor.  Feel free to drop in and check it out plus take a look around. Admission is free and we would love to see you!
If you would like to view more of the pictures of the whole project from the beginning and follow the progress of this project to the end click box to view the full E-2 Restoration Photo Log 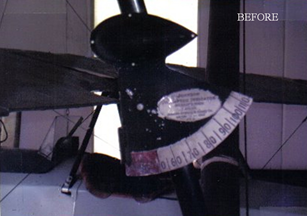 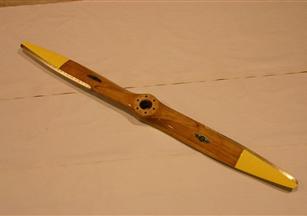 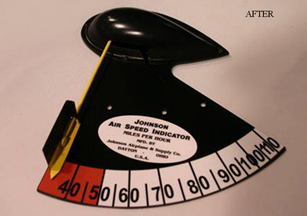 adhesive itself. You can take your time and not worry about the adhesive setting or drying too fast. Also, if you should need to: you can pull the fabrics lose and reposition it, without creating a giant mess or hassle for yourself.
The tail feathers next had all been recovered. The  stitching  and primer was then completed and next came primer and paint. The cowling parts had also been stripped of old paint and had been primed and they too painted. One really unique item is the Cub’s Air Speed Indicator. Pictured here below before and after restoration. It is the little details on things like this that stand out and are really noticed  The prop was gone over and refinished by one of our member’s until it looks like new.

The prep for the new skin was completed on the  wings and the fuselage. All of the tail feathers have been sand blasted, prepped  and painted. All ready for the next step in the process.
In that this restoration is taking place in the museum, it was decided that the plane would be recovered using the “Stewart” water-based system. This system has a number of advantages for our purpose. First of all it is nonflammable. Next, there are no fumes or harmful vapors. Clean up is done with water. One  really  great  feature is the tact time  of  the

back to check out the progress as the project continued.  All this is aimed at educating our visitors and generating interest in the museum and aviation in general. That being said then, let us get back to the project at hand.
After getting all the old material that skinned the plane off, the real work would then begin. All the adhesives had to be removed from the frame of the fuselage and ribs and leading edges of the wings. In addition all the tail surfaces. The paint and any corrosion had to be removed to inspect welds and prepare all surfaces for a coat of corrosion preventive, then new paint before recovering. This part of the project was one of the slowest parts of the whole restoration. Once this was completed things began to move along at a faster pace.

Many pictures were taken as things progressed not only to document the whole project, but also as future reference for the reassembly. After the plane was taken apart,  the one wing and the fuselage  were both then  put into rotating stands to be cleaned, inspected and worked on. Anyone who has undertook such a project as this can tell you: that these stands will make the work a whole lot easier and save time as things progress.

Just a little side note here: We ask  that you notice that all the work on the plane is actually took place on the museum floor. Most of the time while we are open to the public. Visitors could watch the process, many have come 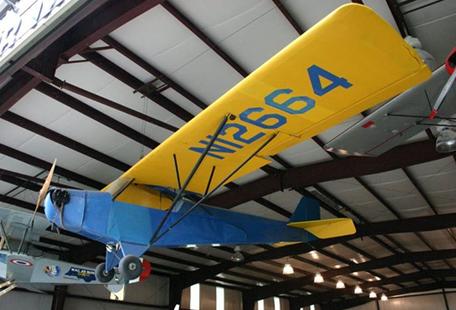 For years the restoration of this rare aircraft has been on our list of things to do, but there always seemed to be some other things that had to come first. Finally  after our yearly Airfare in June, it was decided that this was to become a top priority.

The first thing was to get the plane on the ground. So on Wednesday, June 8, 2011  we slowly lowered it down to the floor. No sooner had the weight of the plane settled on its landing gear, then we heard a loud pop. The bungee on the landing gear was so dry that it snapped allowing the gear to spread out until the plane looked like a beached turtle. This was just the start.
After looking over the plane, it was clear that as most of us expected: that we would need to reskin the whole plane. The fuselage had a 3-foot tear along the right side. The skin on the wings and tail surfaces were cracked and brittle. The wind shield and overhead plexiglass had discolored and had cracked in a number of places. What we could see on the surface was  as I said before expected. Under the inspection plates though things looked quite good. Frame tubing, wing spars, and wing ribs all turned out to be in better condition than what we thought. Disassembly and the stripping off of the skin were to be the next steps.

We all have a  project that has just been hanging around, but for whatever reason, we never seem to be able to get around to. For us here at the Western North Carolina Air Museum that project was our 1932 Taylor E-2 Cub which was literally hanging around: from the rafters in our museum hanger!!!

Our Projects : Past  and  Present !